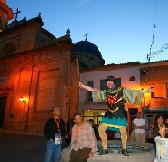 Themed routes to get to know Benissa, Lliber and Murla

During the month of October those interested in getting to know the North Costa Blanca towns have the opportunity to do the themed walking routes that Benissa and Vall del Pop have organized to discover a little more about the towns of Benissa, Lliber and Murla through emblematic and historical figures, actors of the themed routes.

Sunday 3rd of October 2010 Benissa Route: Moors on the coast!, leaving from the Spanish Pavillion of the 5th Multicultural Festival that will be installed in the Dolores Piera park in Benissa at 11:30 am.