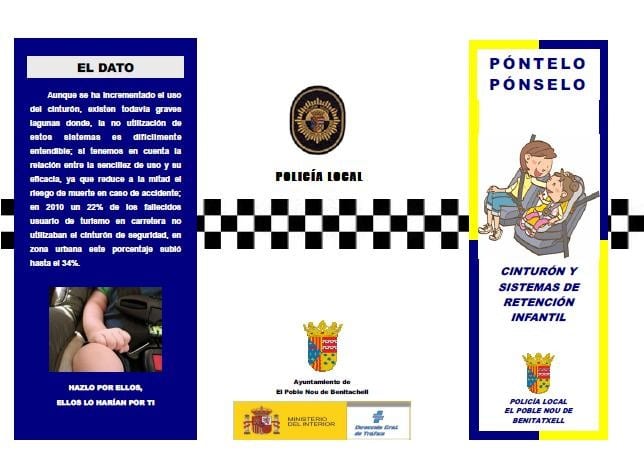 Benitachell local police, in collaboration with the Municipality, the Ministry of Interior and the DGT (Spanish transit Authority) has launched a campaign aimed at road safety, seatbelt use and child restraint systems.

The police department has launched this campaign to coincide with the opening of the school year, as the entrances of the schools are one of the places where most violations are detected.

A comprehensive brochure have been  produced  in order to inform the details of the rules for using safety belt for the driver and the occupants , info about the penalty for breaching serious offense punishable by € 200 and the loss of 5 points.

END_OF_DOCUMENT_TOKEN_TO_BE_REPLACED

Lately, many residents of Benitachell have reported reckless driving and speeding in residential areas.

In the first trimester of 2010, the Local Police carried out an educative campaign based on advice and communication with the citizens. It worked for some sectors of the population, but given the current situation, it didn’t prove totally successful.