Check below the schedule of activities taking place during the Christmas holidays 2012 in Jávea:

During these three days all people attending the event will enjoy several leisure options like a RC Cars race track, bouncy castles, adventure games and workshops. For the grown-ups there will be an area specially designated for the practice of Roller skating, Paintball, Bungee Jumping and Active Extreme

END_OF_DOCUMENT_TOKEN_TO_BE_REPLACED

Once again, the Three Wise Men are about to arrive in Teulada-Moraira with loads of toys, gifts, hopes and peace. Check below the details about the arrival of the emissaries first and then the Wise Men to Teulada-Moraira so we all can go to see them coming.

END_OF_DOCUMENT_TOKEN_TO_BE_REPLACED 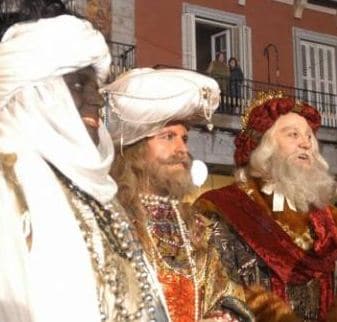 The Three Wise Men in Teulada-Moraira 2011

Every year, The Three Wise Men arrive at Costa Blanca north and stop in Teulada-Moraira. This is their schedule. Find out when and where they will be and accompany them in their festive procession.

END_OF_DOCUMENT_TOKEN_TO_BE_REPLACED

The Three Wise Men and Santa come to Benitachell

After the visit of Santa Claus to Benitachell last 24th December, the town is getting ready to welcome the Three Wise Men -Balthasar, Melchior and Caspar- who will bring their gold, incense and myrrh.

The magi will arrive on 5th January at about 18:00 h. Then, the procession will start in Alicante Avenue and end in Town Hall, where they will be welcomed by the authorities and public figures of Benitachell.

END_OF_DOCUMENT_TOKEN_TO_BE_REPLACED

The Three Wise Men and Santa come to Benitachell

As Christmas arrives, each town organises a themed street market and the arrival of both Santa Claus and the Three Wise Men. A festive town like Benitachell is no exception to this rule: Everything is already set up for the enjoyment of the youngest members of the family.

On 20th and 21st  December, there will be auditions to enter the Municipal School of Music under the direction of Antoni Josep Catalá Buigues, at 17:00 h. The Municipal School of Music is located in 10Plaza Nueva. Every year, this school organises activities linked to music learning; music kindergarten, introduction to music, dulzaina, oboe, etc. People can also sign up for dance lessons, on different levels. The school is also responsible for other cultural activities such as band members exchange, concerts and auditions.