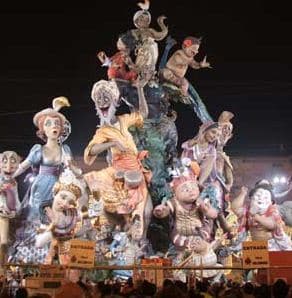 In times when the economic and political situation in Spain are not in their best shape, and the world seems more troubled than ever, traditions come to save the day. Valencia’s Fallas Fiesta is a celebration of fire, sound and creation.

The burning down of paper sculptures or ninots symbolizes purification and a new beginning. The creation of the ninots and the whole festival preparation in general for the next year begin the very day after the cremà —burning day of the sculptures. Actually, if you come to think of it, Fallas is present all year round in Valencia.

END_OF_DOCUMENT_TOKEN_TO_BE_REPLACED

Fiestas in Benissa in honour of the Puríssima Xiqueta 2010 from the 23rd of April to the 2nd of May. We include below the 2010 Benissa fiesta program.