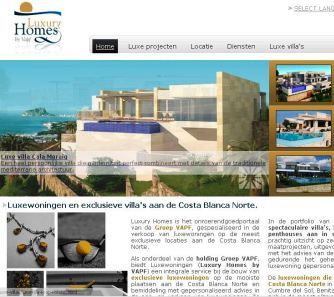 Recently, a Dutch language version of Luxury Homes by Vapf has been launched. This website by Grupo VAPF is dedicated to marketing its luxury villas in Costa Blanca north.

For many years, the Dutch speaking market has always shown a real and sustained interest in the Spanish Costa Blanca, its culture, weather and landscapes.

This could explain the over 26,000 Belgian and Dutch residents registered in the province of Alicante, as reported by the Spanish National Statistics Institute –INE- on January 2010.