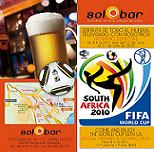 Watch the 2010 World Cup matches at the Solbar

The recently inaugurated Solbar at the Adelfas Shopping Centre in Cumbre del Sol will be specially altering its opening hours to show all the World Cup matches, starting on the 11th of June with the first matches of the 2010 Fifa World Cup held in South Africa.

For a whole month, between the 11th of June and the 11th of July, when the final match will be played, the Solbar will open from 8am to 12am, with midday and evening menus you can enjoy whilst watching the numerous football matches, 64 in total.

South Africa has been chosen to host this year’s football World Cup and, being one of the most popular sports in the world, there is sure to be a large TV audience for every match played. If you are on holiday at Cumbre del Sol or reside there, then you’re sure to find good company if you pop down to the Solbar to watch the matches.

The Solbar has also prepared a special timetable for the event, specifying all the different matches and their dates and times, so you don’t miss out on a single game.