The fourth edition of Geolodía (portmanteau of Geologia and dia, geology and day) will be held on Sunday 8 May for the fourth consecutive year —and throughout the Spanish territory.

This day is dedicated to the popularization of geology using local reference points and the places of study where the geosciences professionals live, research and work.

This is the case of the activity to be held in Moraig cove of Benitachell, led by 40 to 50 professional from different fields of geology and geology engineering in the province of Alicante —most of them professors from local universities and institutes .

END_OF_DOCUMENT_TOKEN_TO_BE_REPLACED 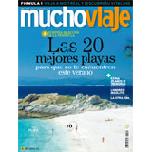 The 20 best beaches on the Iberian Peninsula

The Muchoviaje magazine (Year V no. 61) has this month published an article dedicated to the Top 20 Best Beaches where you can hide this summer, a selection of beaches on the Iberian Peninsula which includes the Moraig Beach in Benitachell (Alicante).

The article reads: “Having lost our way through the curves of Cumbre del Sol, this treasure of the Mediterranean Sea appears at our feet as the road drops steeply with a 22% incline. A real gift of the Gods. The cove has a beach bar which is a delight during the week, hammocks to rent for anyone who finds it impossible to lie on pebbles, a mishmash of languages and big jumps from the rocks. But the long lasting memories will be of the translucent waters. “