Must-See Monuments in the Marina Alta 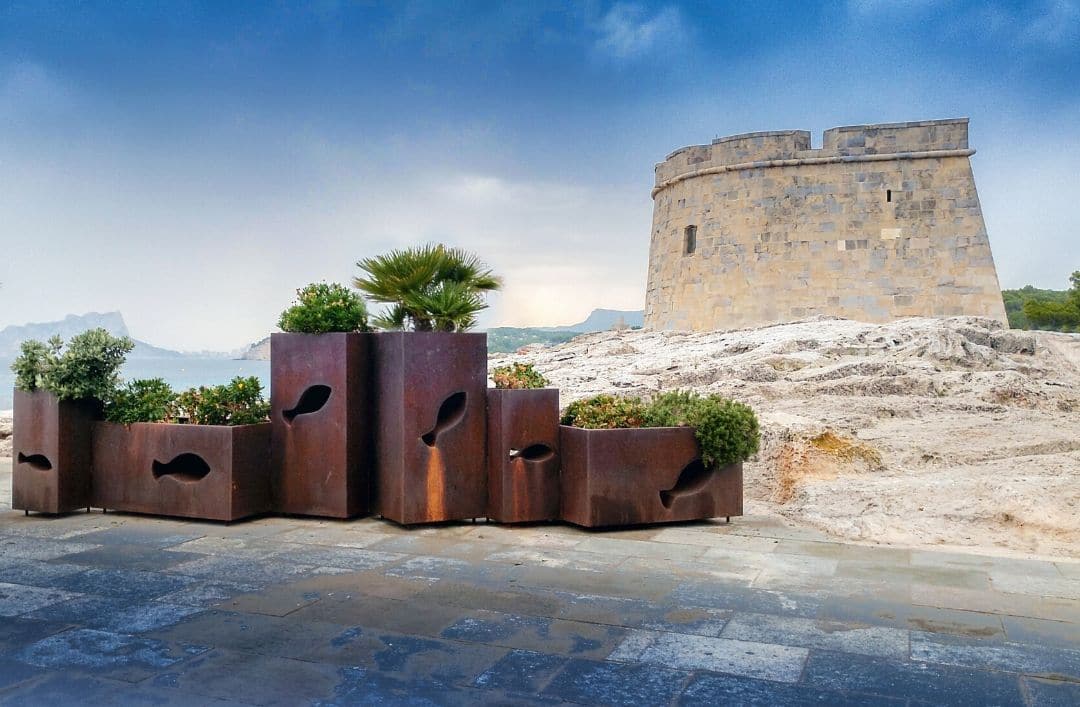 Those privileged enough to live along the Costa Blanca can delight in some of the best beaches, natural landscapes, and mild year-long weather that can be found in the Mediterranean.  In addition, there is no shortage of historical and culture sites waiting to be explored. Our Residential Resort Cumbre del Sol is located in the comarca of Marina Alta, a short drive away from picturesque towns brimming with stunning monuments for you to discover. Don’t miss out on our suggestions below!

There’s history at the very heart of Benitachell in the form of the parish church of Santa María Magdalena (Saint Mary Magdalene). Built between the years of 1710 and 1774, the church appears commonplace from the outside, but has a magnificent interior, with walls of white and ornaments of gold. It has been remodelled and expanded throughout the years to include a striking dome with blue and white tiles and ornate pendentive.

The church gives way to the second famous monument of the area, El Portalet.  As the name suggests, El Portalet is a small portal to the church’s enclosed square. This walled square used to be the nucleus of the town when it was first built. Nowadays, you can visit the square’s viewpoint from which you can spot the Montgó mountain all the way to the Puig Llorença, as well as Cabo San Antonio and even parts of Javea! There’s no better reminder of all the treasures you have so close to your home!

Don’t settle on admiring Javea from a distance and take the time to visit its multitude of cultural monuments! Start in the old town, where you will find famous historic buildings like the Ca Lambert. Built in 1857, it’s now an art centre where the town hall organises cultural activities such as exhibitions and workshops. The centre also has two 16th century houses, which feature late Gothic architecture.

Meanwhile, the Mvsev Soler Blasco (The Palace-Estate House of Antoni Banyuls) is one of Javea’s most important cultural monuments. It was once home to Antonio Banyul, King Phillip III of Spain’s butler. The estate was built in the early 17th century and has a unique sandstone exterior. The inside of the estate was remodelled in the late 19th century, therefore the economic prosperity of the times is richly reflected throughout. You can still see the original hand-painted ceramic floor tiles, as well as admire the top floor which is a loggia. The space is now an Archaeology and Ethnographic Museum, featuring artwork by painter Segarra Llamas. Moreover, on the top floor you’ll find priceless artefacts from the 7th to 19th century.

Make the most of your time in Javea and meaner around the old town through walled streets of the old town, architectural monuments in and of themselves. Don’t miss a visit to the Town Hall, the Church of Saint Bartholomew (Iglesia de San Bartolomé) and the neogothic Mercado Municipal de Abastos (Old Market Hall).

Moraira: Rich in History and Culture, from the City Centre to the Coast

We end our historic tour of Marina Alta in Moraira, which offers many religious and public monuments. The most famous religious monument is the Church and Fortress of Santa Catalina Mártir, which was initially built in the early 16th century to protect the townspeople against pirate attacks. As historical treasure, you’ll be able to spot architectural elements from the 18th century onwards, with everything from Neoclassic designs to a reinterpretation of medieval design in the bell tower which was erected in 1895. You can also tour the gorgeous chapels in Moraira. The Chapel of the Divina Pastora’s renaissance façade and baroque décor, as well as the Chapel of Sant Vincent Ferrer’s Neoclassic architecture and colourful cupola are especially recommended.

On the one hand, you have the formerly walled-in historical city centre with its 16th and 17th century details. You can also visit the Sala de Jurats i Justicies. Built in 1620, the building has served as a house, town hall, trading post and more. You can also visit the beach where you’ll find more historic fortresses built to guard against pirate attacks, such as the Castle of Moraira and the Vigia del Cap d’Or Tower.

We hope we’ve inspired you to visit all the wonders you have near your home! Follow us on social media to stay up to date with everything Residential Resort Cumbre del Sol and its surroundings have to offer.