2010 Moors and Christians Fiestas in Moraira 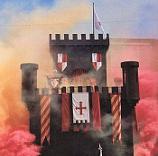 Moors and Christians in Moraira in June

Information about the program for the 2010 Moors and Christians Fiestas in Moraira between the 10th and 13th of June.

Thursday 10th June 7:15pm Entrance of bands from the castle. 7:30pm Parade by the “Filas” (Moors and Christians Associations) and official start of the fiestas with the hoisting of the flag by the Moors and Christians’ Central Board at the Moraira castle and firing of musketry. 10:00pm Departure of the Central Board’s flag bearer accompanied by the ambassadors to collect all the banners from the different “Filas”. 10:45pm Presentation of the Filas’ banners, followed by open-air dance with mobile disco.

Friday 11th of June 1:00pm Parade and firing of musketry at Paseo del Castillo. 7:00pm Offering of flowers in honour of the Blessed Christ of Moraira. 11:00pm Spectacular Moorish Conquest of the Ampolla beach followed by the Moorish Ambassadorship and Conquest of the Castle. Performance by the COMANCHE music band until the early hours of the morning.

Saturday 12th of June 9:00am General awakening with musket firing. 11:00am Marching band.12:00pm Mass in honour of the Blessed Christ of Moraira in the Church of Moraira.12:30pm Shooting of muskets on the castle esplanade.1:00pm Informal parade of the “Filas”. 7:30pm Christian re-conquest. Assault of the castle by the Christian forces followed by the Christian Ambassadorship and Re-conquest of the castle. 12:00am Open-air band concert at El Fortí building and then Cabila Night (for the different Moors and Christians’ groups).

Sunday 13th of June 9:00am General awakening with musket firing.11:00am Marching band. 11:30am Childrens’ games. 1:00pm Marching band.1:30pm Musketry firing at the castle esplanade. 6:00pm Entrance of bands from the castle to the El Fortí building. 7:00pm Grand Parade and at the end big firework display.

We recommend you watch the Moorish Conquest of the Ampolla beach, but you do have to get there early to be able to find a parking place and get a good seat.